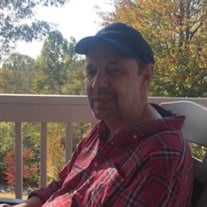 Abraham Grant West, 71, of Boomer, passed away, Tuesday, January 11, 2022 at Wilkes Regional Medical Center. He was born May 8, 1950 in Caldwell County to the late Ira Alexander West and Fannie Kilby West. In addition to his parents, he is... View Obituary & Service Information

The family of Abraham Grant West created this Life Tributes page to make it easy to share your memories.

Send flowers to the West family.