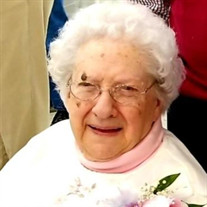 Allene Beshears Haas, 92, completed her earthly journey and entered the realm of Heaven on the morning of August 5, 2021. Jesus Christ, her Savior, is now her eternal caregiver and her life is forever secure with Him. Allene was born on January 8, 1929 in the Jobs Cabin township near Summit in Wilkes County, NC. She was birthed in a country farmhouse to Aaron Hegeman “Heg” Beshears of Wilkes County and Eugenia Diane “Genia” Teague Beshears of Ashe County, NC. Her older brother was Ellis Alvin Beshears and her younger brother was Aaron Kyle Beshears. After Kyle, she had two younger sisters born; Elizabeth Louise in 1932 and Irene in 1934, but they died as infants. Allene remembered those babies fondly, and often wondered what it would have been like to grow up with sisters even keeping some of their little homemade feed sack clothes as long as she lived. After spending her first several years walking to a little country school named Mapel Springs, she went on to Mt. Pleasant High School in Champion, NC. She graduated Valedictorian (the student with the highest academic achievements of the class) in 1947. More importantly, she accepted Jesus Christ into her heart around age 13; during a revival at Yellow Hill Baptist Church in Purlear, NC and baptized in Falls Creek. She could still point out that spot in the creek after ninety years of age. Following high school, Allene attended Wilkes General Hospital School of Nursing, and became a Nurse’s Aid. She then worked at Wilkes hospital until getting another job at Blackwelder Hospital in Lenoir, NC. While she was working there, a young man came to the hospital to see his newborn niece in June of 1950, but spent more time looking at Allene. She married Daniel “Parks” Haas on August 25, 1950 in the front room of the farm house that Parks was born in. That union lasted forty years, until Parks left this earth in 1990. Allene worked for over 20 years at the family owned Jennings Street Coin Laundry in Lenoir, NC. She was a superb daughter, sister, wife, mother, grandmother, great-grandmother, daughter-in-law, sister-in-law, mother-in-law, aunt, and friend. She has been a faithful member of Poovey’s Chapel Baptist Church in Hudson, NC since the early 1950’s. Hers was truly a life well lived. She nurtured a quiet, gentle spirit, an infectious chuckle of laughter, and a godly influence during her time on earth. Certainly, she left behind a trail of crumbs leading to the Bread of Life. In addition to her immediate birth family and her husband, she was preceded in death by an infant so, Harold Paul Haas and daughter-in-law, Marie Elder Haas. Remaining on earth with the privilege of cherishing memories of this precious lady are her children, Daniel (Rachel) Haas of Granite Falls, NC; Janet (Chuck) of Hamel, Illinois; Debra (Gary) Solanick; and Wanda (Gerald) Dula of Lenoir, NC. She is the Grandmother of Jonathan (Shasta) Haas of Granite Falls, NC, Benjamin (Amanda) Haas of Durham, NC, Stephen (Amy) Haas of Cherryville, NC, Philip (Rebekah) Haas of Richmond, VA, Paul (Heather) Hooks of Trenton, IL, James (Beth) Hooks of Godfrey, IL, Kristel (Sean) Hosfield of Lenoir, NC, Lisa (Daniel) Wright of Granite Falls, NC. She is the great-grandmother of 20 and aunt to 8 nieces and 4 nephews. A special thanks goes to Wanda and Gerald Dula with whom she lived for the last 12 years while teaching them how to age gracefully. Services remembering her life will be held Monday, August 9, 2021 at Poovey’s Chapel Baptist Church in Hudson, NC. Receiving will be from 1:00 pm until 2:00 pm, and the funeral service at 2:00 pm. The burial will be following at the church graveyard. In lieu of flowers, donations may be made to Poovey’s Chapel Baptist Church, 2822 Poovey’s Chapel Church Rd, Hudson, NC 28638. The family wishes to thank Evans Funeral Service in Lenoir, NC for all of their help with this time of bittersweet plans and endeavors. Online condolences may be sent to www.evansfuneralservice.com

Allene Beshears Haas, 92, completed her earthly journey and entered the realm of Heaven on the morning of August 5, 2021. Jesus Christ, her Savior, is now her eternal caregiver and her life is forever secure with Him. Allene was born on January... View Obituary & Service Information

The family of Allene Beshears Haas created this Life Tributes page to make it easy to share your memories.

Send flowers to the Haas family.