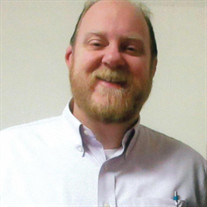 Ben Keen Benjamin Patrick Keen, age 44, went to worship at the feet of Jesus and lay down his crowns on February 13, 2021. He passed away at Novant Health Presbyterian Medical Center in Charlotte, NC after almost a month of battling complications due to the COVID-19 virus. Ben was an outgoing loving person. He never met a stranger. He was kind, tender-hearted and often referred to as a gentle giant due to his tall frame. He was born in Kingsport, TN and grew up there for most of his childhood except for a short time his family lived in England. He graduated from Dobyns-Bennett High School and was pleased to say he was a part of the marching band legacy there. Every Thanksgiving he would retell the story of how he got up before dawn to march in the Macy’s Thanksgiving Day Parade as a high schooler. He continued his education at Tennessee Tech University in Cookeville, TN and graduated with a Music Education degree studying euphonium under R. Winston Morris. He was also a proud member of the Tennessee Tech Tuba Ensemble, Wind Ensemble and Tech Chorale. He met his wife of 23 years, Colleen, in the Tech Chorale. They married in 1997. While debating which graduate school to attend in the summer of 1998, Ben felt called to serve the local church as a minister of music. He surrendered to that call and Ben and Colleen moved to Ft. Worth where Ben attended Southwestern Seminary and earned a M.M. in Church Music. Ben was honored to serve Irving Baptist Fellowship, Irving TX, as their Minister of Music and Youth, Broadmoor Baptist Church, Shreveport, LA, as their Associate Minister of Music, First Baptist Church of Natchitoches, Natchitoches, LA, as their Minister of Music and Senior Adults, and Lower Creek Baptist Church, Lenoir, NC, as their Minister of Music and Media. Besides worship he was also deeply passionate about teaching God’s word and through the years he led Bible studies with differing age groups. He ministered to and with adult, middle school and senior adult choirs, church orchestra and praise bands. Ben was a member of the Louisiana Baptist Singing Men whose members and concerts blessed him immensely and he was privileged to serve with Global Missions Project, using his musical talent for missions in Japan, Ukraine, Russia and Budapest. Besides these international trips he was given the privilege to lead musical mission groups and lead worship here in the United States and in San Pablo, Guatemala. Ben is survived by his wife, Colleen Iglody Keen; four daughters, Avery, Regan, Charis, and Darby; father, George Morris Keen; sister, Kristen Noel Keen; his aunt and uncle, Dr. Henry Clark, III. and wife Pat; cousin, Kelly; and niece and nephew Alexa and Clark. He was preceded in death by his mother, Linda Clark Keen; paternal grandparents, Mr. and Mrs. Morris Keen; and maternal grandparents, Mr. and Mrs. Henry J. Clark, Jr. A service to honor his memory will be on Friday, February 19, 2021 at Lower Creek Baptist Church, 633 Lower Creek Dr, NE, Lenoir, NC 28645 at 4:30 pm in the afternoon. A visitation will follow. A separate graveside service will be held at 1:00 PM Saturday, February 20, 2021 at Oak Hill Cemetery, 800 Truxton Drive, Kingsport, TN 37660. Services will be officiated by Rev. Josh Hargett and Dr. Herb Armentrout. In lieu of flowers please make donations in memory of Ben to Global Missions Project: Global Missions Project, 1720 Mars Hill Rd, Suite 120-371, Acworth GA 30101 or visit their website http://globalmissionsproject.com/donate-now Online condolences may be sent to www.evansfuneralservice.com Evans Funeral Service & Crematory of Lenoir is serving the Keen Family.

Ben Keen Benjamin Patrick Keen, age 44, went to worship at the feet of Jesus and lay down his crowns on February 13, 2021. He passed away at Novant Health Presbyterian Medical Center in Charlotte, NC after almost a month of battling complications... View Obituary & Service Information

The family of Ben Keen created this Life Tributes page to make it easy to share your memories.

Send flowers to the Keen family.