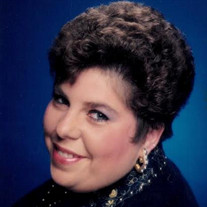 Cinda Lee Anderson Campbell, 60, of Lenoir, passed away on Monday, February 1, 2021 at her home. Cinda was born on Wednesday, the day before Thanksgiving, November 23, 1960, to her parents, Sylvia Alexander Anderson and the late Joel Lee Anderson. In addition to her father, she was preceded in death by her husband, Billy Scott “Scotty” Campbell; her grandparents, Willis and Idell Alexander and Sarah Katheryn and Moyel Cuthbertson; also preceding her were her aunt, Wilma Alexander Soderberg and an uncle, Robert J. Alexander. Those left to cherish her memory in addition to her mother are her only son, Billy Lee Campbell; a step daughter, Casie Michelle Campbell both of Lenoir; her brother, Joel Todd Anderson of Bonneau, SC; her aunts and uncles, Hilda A. and Bob Poole of Fort Mill, SC, Phyllis “Peggy” A. and Jimmy Villanueva of Bonneau, SC and Marlene Hines Alexander of Lenoir; she is also survived by a host of cousins. Cinda enjoyed going to Vacation Bible School and accepted Jesus as her Savior in 1977. She was baptized at the age of 16 and was a member of Central Baptist Church in Whitnel. After high school, Cinda attended Kings Business College in Charlotte. She then went to work at Village Inn, Quality Mart, Singer Furniture, Broyhill Furniture- Main office, and her longest employment was at DSS, where she had many friends. She dearly loved to help the elderly clients while at DSS. Cinda had a special name and thanked me numerous times for giving her the name Cinda. It came to me while I was in the hospital in 1959. In the dream, I would next be in a hospital to deliver a baby girl and her name was to be “Cinda”. She had an outgoing nature and would make friends easily with her humor. She had a huge heart for people and animals. Over the years, she would help ones in need by giving them a place to stay for short times. She was “Mom” to the many who came her way. Cinda had a lasting friendship with several people. Her longtime best friends are Mistie Beach Parker and Martha Sigmon. They shared many good times ever since high school. Cinda was an accomplished artist with gel pens. She discovered she could color pictures, designs and purses and create beautiful works of art. This was her passion for the last five years and gave her great joy. We leave you with this message: “Be kind to your neighbors. Tell your loved ones you LOVE them and that Jesus loves them also”. A graveside service celebrating Cinda’s life will be held on Friday, February 19, 2021 at the Woodlawn Memorial Gardens in Lenoir at 1:00 PM. Officiating will be Pastor John Jernigan, Pastor Stuart White and Pastor Charles Mullis. In lieu of flowers, memorials can be made to Central Baptist Church at 311 Connelly Springs Road, Lenoir, NC 28645. Online condolences can be sent to the Campbell family at www.evansfuneralservice.com. Evans Funeral Service and Crematory of Lenoir is serving the Campbell family.

Cinda Lee Anderson Campbell, 60, of Lenoir, passed away on Monday, February 1, 2021 at her home. Cinda was born on Wednesday, the day before Thanksgiving, November 23, 1960, to her parents, Sylvia Alexander Anderson and the late Joel Lee Anderson. In... View Obituary & Service Information

The family of Cinda Campbell created this Life Tributes page to make it easy to share your memories.

Cinda Lee Anderson Campbell, 60, of Lenoir, passed away on Monday,...

Send flowers to the Campbell family.