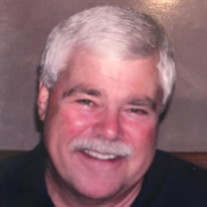 Fred L. Flora, Jr., 73, passed away in Lenoir on Saturday, December 12 following his illness with vascular dementia. Fred was born in Tucson, AZ and raised in the Savannah, GA area then later in La Grange, NC. He proudly graduated from his beloved University of North Carolina with degrees in business and law, where he also met his wife and travel partner of 45 years Beth Lackey Flora. A constant and voracious reader, it seemed he knew a little bit about everything, and particularly exhibited a vast knowledge of Outer Banks and Topsail Island history along with encyclopedic approaches to the fishing and crabbing techniques of these and inland waters. His treasured college summers skippering and park ranging on North Carolina’s coast also contributed to his ongoing boast that he was solely responsible for “boat shoes” becoming popular in Chapel Hill. Fred (Freddy to many) was the life of any party he joined, regardless of whether or not he was technically invited to the party in its inception. His antics during his early career in Fayetteville, where he began practicing law in the 1970s, were legendary. Later in Lenoir, where he gratefully assimilated to and embraced the foothills lifestyle despite being a flatlander, he continued to make and entertain treasured friends. Earlier in life, Fred was enthusiastically involved in the UNC GAA, the Young Lawyers Association, and the C.R.E.S.T. group home organization in Fayetteville. After moving to Lenoir, he joined First Presbyterian Church and was also involved with Rotary, Ducks Unlimited, Main Street Lenoir, Caldwell Youth Soccer, the Boy Scouts, and the Caldwell Arts Council, among other organizations. For many decades, family and friends were also able to appreciate the incredible artistic talent displayed in his woodworking, drawing, painting, and photography. Fred was preceded in death by his mother, Mollie Walston Flora, and father, Fred L. Flora, Sr., of La Grange. Survivors include wife Beth of Lenoir, son Jonathan of Raleigh, daughter Megan of Knoxville, TN, and sister Peggy Dewar and her husband Lynn of Raleigh, along with six nieces and nephews. Due to the ongoing pandemic, no public service will be held. In this time in which so many communities and individuals are suffering from this year’s circumstances, the family asks that in lieu of flowers you consider making a gift in Fred’s memory to a favorite organization in your community.

Fred L. Flora, Jr., 73, passed away in Lenoir on Saturday, December 12 following his illness with vascular dementia. Fred was born in Tucson, AZ and raised in the Savannah, GA area then later in La Grange, NC. He proudly graduated from his... View Obituary & Service Information

The family of Fred Flora created this Life Tributes page to make it easy to share your memories.

Send flowers to the Flora family.