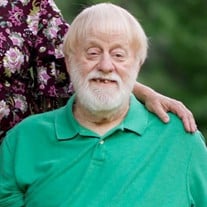 Ivey Bell Stine, Jr., 73, of Lenoir NC passed away on January 21, 2021 at Hospice in Lenoir, surrounded by family in his final days. He was born in Caldwell County on Aug 5, 1947, to the late Ivey Sr. and Ola Stine. Ivey attended Lenoir High School and later achieved his GED while in the United States Army. He was drafted in 1966 to fight in the Vietnam War, he gained a Specialist E5 rank while serving, and was proud to serve his country. He married the love of his life, Kathy Miller, almost 50 years ago – years filled with fun trips, laughter, and the occasional argument while driving. Together, they had two kids, Kevin and Stephanie; at least one of them could be found with him wherever he went. Ivey was a loving husband, father and grandfather but he was also a mechanic, a welder, a plumber or electrician when you needed one, a carpenter, an IT tech of sorts, ham radio enthusiast, bicycle tinkerer, a drag racer, a Sunday School teacher, a soldier, a little brother, a jokester, a great cook, a boy scout troop leader, a “dad” to many more kids than just his own, and a friend to everyone he met. While he was most comfortable in a pair of ragged cut-off jean shorts and a hot rod t-shirt from a local cruise-in, he was anything but plain. He was always kind to others, always wore a smile, helped others in need, stood up for what was right, and always had a joke or a funny comment ready to lift your spirits. He suffered through many health complications over the years, but kept his faith and joy through it all. Ivey is survived by his wife Kathy, two children, Kevin Stine and his wife Lori…, Stephanie Boyett and her husband John; his four grandchildren, Jacob, Evan, and Emma Stine, and Maverick Boyett; his sister Betty Johnson and her husband Rev. Frank Johnson; and nephew Greg Crowder. He is preceded in death by his father Ivey B. Stine, Sr., mother Ola Beane Stine, sister Susan Ann Stine, and 2 half-sisters Margaret and Jean Stine. A private graveside service will be held on Tuesday, January 26th in Wilkesboro. A cruise-bye memorial will be held for friends and extended family on Sunday, January 31st in downtown Lenoir at 2:00pm so others can pay their respects while social distancing. The family of Ivey Stine wishes to thank Caldwell County Hospice.

Ivey Bell Stine, Jr., 73, of Lenoir NC passed away on January 21, 2021 at Hospice in Lenoir, surrounded by family in his final days. He was born in Caldwell County on Aug 5, 1947, to the late Ivey Sr. and Ola Stine. Ivey attended Lenoir High... View Obituary & Service Information

The family of Ivey Stine Jr created this Life Tributes page to make it easy to share your memories.

Send flowers to the Stine family.