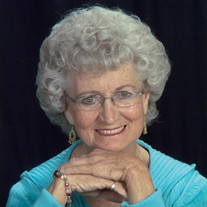 Reba Coffman, 90, of Lenoir moved to her heavenly home with her son by her side on February 17, 2021. Reba was born in Caldwell County on June 18, 1930 to the late Thomas Glenn and Oma Church. Reba was married to the late Nathan Coffman. Reba being a child during The Great Depression and a teenager living during World War II she learned to be fierce and determined yet caring and generous. Reba had a smile that was infectious and a great sense of humor. She had beautiful blue eyes that twinkled which her sons inherited. She will be greatly missed by her family and friends. Reba taught herself to be a bookkeeper and eventually worked her way to being the Business Manager/General Manager of the largest VW and Porsche dealership in Indianapolis. After retirement, she returned to North Carolina to live near her son. Reba volunteered at Caldwell Memorial UNC Healthcare in Lenoir for a number of years. She faithfully attended church, until her illness, at New Life Baptist Church. In addition to her husband, Reba is preceded in death by her son, Thomas “Randy” Phillips; her sister, Coleen Greene; her nephew, Roger Greene; and her niece, Glenda Walsh. Reba is survived by her son, Tony Phillips and her nieces, Drena Adams (Wiley) and Renee Triplett (Boyd), all of Lenoir. She is survived by her step-daughter, Betty June Thompson (Fred) of Tuscan, Arizona. Reba is survived by Roger Greene’s wife, Carolyn Greene. She is survived, also, by numerous relatives. The family would like to express their gratitude for their love and attention to April Baker, Olivia Dugger, Amber Greene, and to the caregivers of Caldwell County Hospice. There will be a graveside service on Saturday, February 27, 2021 at 2:00 pm at Blue Ridge Memorial Park with Pastor Terry Kale officiating. The family asks that masks be worn and social distancing be practiced. In lieu of flowers, the family asks that donations be sent to New Life Baptist Church or Caldwell County Hospice. Online condolence may be sent to www.evansfuneralservice.com. Evans Funeral Service is serving the Coffman Family.

Reba Coffman, 90, of Lenoir moved to her heavenly home with her son by her side on February 17, 2021. Reba was born in Caldwell County on June 18, 1930 to the late Thomas Glenn and Oma Church. Reba was married to the late Nathan Coffman. Reba... View Obituary & Service Information

The family of Reba Coffman created this Life Tributes page to make it easy to share your memories.

Reba Coffman, 90, of Lenoir moved to her heavenly home with her...

Send flowers to the Coffman family.