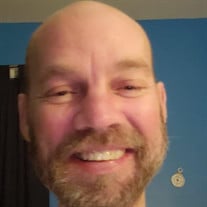 Robert Joseph Eller, age 47, of Hudson, NC passed away at his home on August 4, 2021. Robert was born in Caldwell County on March 4, 1974 to William Ray Eller and Patricia Shields Eller. He was a graduate of South Caldwell High School and attended UNC Greensboro and a graduate of Appalachian State University. He joined the Peace Corp and served his country in China teaching English. Upon returning home from China, he taught as an interim at Granite Falls Middle School before accepting a full-time position teaching English at South Caldwell High School, in addition to teaching night classes at Catawba Valley Community College. Teaching was Robert’s love, along with his son Anderson. He loved watching the students learn and apply what they had learned to life. He had a teaching podium at South that the student could sign at the end of the year, and is filled with the names of the students who loved him. Robert loved camping, backpacking, and kayaking. He loved to take his son and best friends Adam Overbay, Charles Wallace, and David Ervin camping with him. He always said he had the best friends anyone could ever have. Robert had severe health problems for the last few years and suffered severe pain; along with suffering depression and PTSD. Robert is preceded in death by his grandparents Delmar and Nellie Eller and Luther and Marjorie Shields. He is, also, preceded in death by his brother George Anderson Eller. Robert leaves behind a son Anderson Eller of Boone, NC; his parents Ray and Pat Eller of Lenoir; sister, Robin Eller Boutwell (George) of Fort Valley, Georgia; brother, Ray Eller Jr (Carmen) of Kernersville, NC; one niece and five nephews. As per Robert’s wishes, there will be no funeral service. In lieu of flowers, donations may be sent to Collier’s United Methodist Church, 2625 Clark’s Chapel Rd, Cajah’s Mountain, NC 28645. Online condolences may be sent to www.evansfuneralservice.com Evans Funeral Service is proud to serve the Eller family.

Robert Joseph Eller, age 47, of Hudson, NC passed away at his home on August 4, 2021. Robert was born in Caldwell County on March 4, 1974 to William Ray Eller and Patricia Shields Eller. He was a graduate of South Caldwell High School and attended... View Obituary & Service Information

The family of Robert Joseph Eller created this Life Tributes page to make it easy to share your memories.

Robert Joseph Eller, age 47, of Hudson, NC passed away at his...

Send flowers to the Eller family.