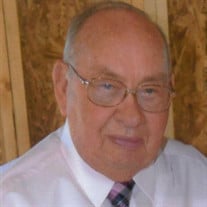 Roy W. Ogle, 85, of Sawmills, N.C., went home to stay on April 20, 2021, while surrounded by family at the Caldwell Hospice and Palliative Care Center in Hudson, N.C. Roy was born in Madison Township of Richland County, Ohio, on Oct. 20, 1935, to Cora (Fox) and Clyde Ogle. Both preceded him in death. Roy grew up primarily in Richland and Crawford counties in Ohio. He graduated in 1954 from Leesville High School. After graduation, he enlisted in the U.S., Army and served two years in Germany until 1956. He was a member of the U. S. Army Reserves until honorably discharged on June 30, 1962. Following his return from Germany, Roy married his high school sweetheart and classmate, Carolyn J. Witter on Sept. 23, 1956, at St. John’s Evangelical Lutheran Church in Leesville. They lived in Leesville until 2015 when they moved to Bucyrus, Ohio. In 2019 they moved to Sawmills, N.C. Roy worked at the Shelby Depot and later for PPG Industries in Crestline. He left PPG to begin a career as a truck driver for Duff Truck Lines in Mansfield. He also drove for O.K. Trucking and Matlack Trucking before retiring from the road in 1995. Following his retirement as a truck driver, Roy worked for the Timken Company in Bucyrus and the Crawford County Council on Aging. Roy played high school baseball and basketball for the Trojans of Leesville High School, as well as semi-pro baseball for the Galion Merchants as a player-coach. He started the Leesville Babe Ruth baseball team and later coached Leesville’s youth baseball team. Roy was an avid outdoorsman who coon hunted and fished. He was also an enthusiastic fan of Ohio State football and basketball, the Cleveland Indians and the Cleveland Browns. Roy’s real devotion, however, was reserved for his faith and his family. He faithfully served the First Alliance Church in Bucyrus as an elder, Sunday School teacher and Governing Board member. Roy loved his annual family camping trips with children, grandchildren and great-grandchildren, and fishing trips with his sons and grandson. Roy is survived by Carolyn, his wife of nearly 65 years; two sons, Gary Ogle and wife Sandy of Sawmills, N.C., and Steve Ogle and wife Cathy of Danville, Ill.; four grandchildren, Anna Garner and husband Matt of Connelly Springs, N.C., Mark Ogle of Delphi, Ind., Becky Collier and husband Marc of Ocala, Fla., and Mary Davis and husband Jay of Delphi, Ind.; six great-grandchildren, Will, Michael, Lilly and Leily Collier and Gage and Gabriel Davis. Roy is also survived by older brother Earl Ogle and wife Margene of Mansfield, Ohio, twin brother Ray Ogle and wife Kathy of Mansfield, and younger brother Donald Ogle and wife Mary of Mansfield. In addition to his parents, Roy was preceded in death by granddaughter Megan Ogle, brothers Clyde Jr. and James Ogle, and sister Virginia Pierce. Graveside services officiated by Pastor Stephen Owens will be held at 11 a.m., April 24, at the Mt. Zion Baptist Church Cemetery in Sawmills, N.C. A memorial service to celebrate Roy’s life will be held at 11 a.m., May 8, at the First Alliance Church of Bucyrus led by Pastor William Strader. In lieu of flowers, the family suggest donations in memory of Roy could be made to Caldwell Hospice and Palliative Care in Hudson, N.C., the Lottie Moon Missionary Fund of the Mt. Zion Baptist Church in Sawmills, N.C., or the Great Commission Fund at the First Alliance Church in Bucyrus, Ohio. Online condolences may be sent to www.evansfuneralservice.com Evans Funeral Service of Lenoir, NC is serving the Ogle Family.

Roy W. Ogle, 85, of Sawmills, N.C., went home to stay on April 20, 2021, while surrounded by family at the Caldwell Hospice and Palliative Care Center in Hudson, N.C. Roy was born in Madison Township of Richland County, Ohio, on Oct. 20, 1935,... View Obituary & Service Information

The family of Roy Wayne Ogle created this Life Tributes page to make it easy to share your memories.

Send flowers to the Ogle family.