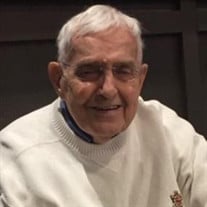 Sanford Eugene Bolick left this earth on September 11, 2020 to take up residence in his new home in Heaven. He was born September 18, 1932 in Caldwell County to the late Vern and Clara Bolick. In addition to his parents, he is preceded in death by four sisters, Wanda Bolick, Shirley Bolick, Norma Smith and Glenda Martin; and two brothers, Craig Bolick and Gregory Bolick. Survivors include his wife of 65 years, Annette Poole Bolick; children, Jeffery Bolick and wife Regina, Candy Marshall and husband David, and Eddie Bolick and wife Cindy; six grandchildren, Mandy Taylor, Matt Bolick, Chad Bolick, Jill Gragg, Brad Marshall, and Jeremiah Marshall; eight great-grandchildren, Brittany Felder, Gracie Bolick, Madalyn Gragg, Ella Taylor, Jaxson Gragg, Evan Taylor, Eli Bolick, and Luke Bolick; a sister, Evelyn Bryant; and numerous nieces and nephews. Sanford was a member of Mountain Grove Church and was a veteran of the United States Army. He loved his community, family and friends and will be fondly remembered by those impacted by his life. Dozens of people who worked for Sanford considered him a friend. He was an amazing motivator and did so with a kind and gentle heart. He was well respected and highly sought after for his skills as a supervisor. Blessed with a double portion of the gift of giving, he was well known for his generosity, even to people he barely knew. Sanford loved to laugh and joke with friends and family and he’d just smile if somebody got even. Sanford’s was a quiet, sincere faith that governed his life. He lived joy fully and was the epitome of a joyful giver. He endured suffering and setbacks with his trademark grace and good nature. He did not complain, instead choosing to always be optimistic. What he loved most was his wife of sixty-five years, Annette. They had a beautiful, blessed life together. Their family is honored and deeply grateful for their love and faithfulness. Go Rest High Sanford A graveside service will be held Tuesday, September 15, 2020 at 3:00 pm at Whitnel First Baptist Church Cemetery conducted by Toby Smith. The family would like to extend a special thank you to Dr. Jay Schmidt for all his years of care and friendship to our husband/father/pawpaw and to Caldwell Hospice. In lieu of flowers, the family ask that donations be made to Caldwell Hospice and Palliative Care. Online condolences may be sent to www.evansfuneralservice.com Evans Funeral Service & Crematory is serving the Bolick family.

Sanford Eugene Bolick left this earth on September 11, 2020 to take up residence in his new home in Heaven. He was born September 18, 1932 in Caldwell County to the late Vern and Clara Bolick. In addition to his parents, he is preceded in... View Obituary & Service Information

The family of Sanford Eugene Bolick created this Life Tributes page to make it easy to share your memories.

Send flowers to the Bolick family.