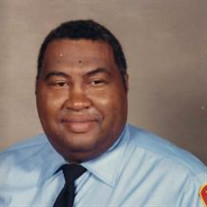 Warren Harper, age 76, of Lenoir passed in peace on Saturday November 14, 2020 at Hickory Falls Health and Rehab. He was born November 16, 1943 in Caldwell County to the late Theodore Roosevelt Harper, and Fannie Dula Harper. In addition to his parents he was preceded in death by, three brothers, Tyrone, Wilbert, and Barry and two sisters, Irene, and Iva (Ivey). He leaves to cherish his memory; two sisters Dorothy Johnson, and Nettie Wiggins both of Florida, and his former wife Joan Ferguson, stepson Anthony (Tony) Ferguson, and a host of nieces, nephews, cousins, family, and friends. Mr. Harper was a longtime member of Harper’s United Methodist Church and a graduate of Freedman High School. Warren enlisted in the US Army in 1962. In 1969 Warren joined the Lenoir Fire Department as the 1st African American Fire Fighter and retired after 30 years of service. In addition to his service, Warren chauffeured many friends and family members around by car including many well-known names and companies in the community. Due to his tall and stout statue, he was given a unique nickname of “High Pockets”, but everyone knew him as a Man of God, Service, and Good Deed. Mr. Harper will lie-in state on Monday November 23, 2020 from 11:00AM until 1:30PM at Evan Funeral Home. A graveside service will be held at 2:00 PM, at Harpertown Community Memorial Cemetery, conducted by Pastor Myer Dahn. Full Military Honors will be provided by the NC National Guard and the Caldwell County Veterans Honor Guard. Serving as pallbearers will be members of the Lenoir Fire Department. Flower bearers will be family and friends. Per the family’s request, masks and social distancing will be required. Condolences can be left for the family at www.evansfuneralservice.com Evans Funeral Service and Crematory is serving the family.

Warren Harper, age 76, of Lenoir passed in peace on Saturday November 14, 2020 at Hickory Falls Health and Rehab. He was born November 16, 1943 in Caldwell County to the late Theodore Roosevelt Harper, and Fannie Dula Harper. In addition to... View Obituary & Service Information

The family of Warren Harper created this Life Tributes page to make it easy to share your memories.

Warren Harper, age 76, of Lenoir passed in peace on Saturday...

Send flowers to the Harper family.