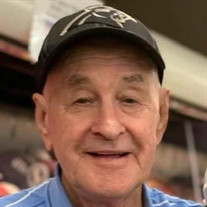 Mr. Samuel “Sam” Edward Potter, age 84, of Granite Falls passed away at his home on Monday, October 18, 2021. Born December 13, 1936 in Watauga County, Sam was a son of the late Rom and Alice Snyder Potter. Sam was an avid golfer. He was a jack of all trades and liked to build things. He especially enjoyed building birdhouses. He had worked for over 40 years at MDI. He was active in taking care of the apartments where he lived. He enjoyed doing the ground keeping at his apartments. Most of all, he will be remembered as a loving father and grandfather. In addition to his parents, he was preceded in death by a granddaughter, Leslie Potter; two brothers and two sisters. Survivors include his children, Jimmy Potter (wife Andrea), Deborah Martin and Tammy Dennie (husband Terry); his grandchildren, Dawn Coffey, Emilie Potter, Erica Martin, Matthew Martin, Austin Martin, Justin Starnes (wife Lacey) and Megan Starnes; his great grandchildren, Knox Cole Grasty, Macey Terry, Alisza Terry, Lanna Terry, Phoenix Terry, Lucas Starnes and Maddox Isaacs; he is also survived by nine siblings and numerous other relatives. The family is having a private memorial service to celebrate Sam’s life. The family would like to request memorials be made to Amorem Hospice (Formerly Caldwell Hospice) at 902 Kirkwood Street, Lenoir, NC 28645. Online condolences can be sent to the family at www.evansfuneralservice.com. Evans Funeral Service and Crematory of Lenoir is serving the Potter family.

The family of Sam Potter created this Life Tributes page to make it easy to share your memories.

Send flowers to the Potter family.