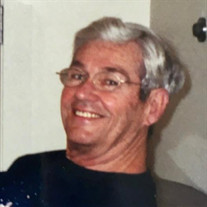 William Edward Healey died peacefully with family by his side on September 28, 2020, at Caldwell Hospice in Hudson, NC. Bill was born on April 26, 1932, in Boston, MA to Philip and Monica (Joy) Healey. Bill was passionate about traveling, and after serving four years in the Air Force during the Korean War, it is fitting that he provided for his family with a career in the airline industry. The consummate salesperson and tour guide, he prospered in this field for over 35 years, most notably with Aer Lingus, the flagship carrier airline of his beloved Ireland. To know Bill was to appreciate his zest and enthusiasm for the things that brought joy to his life. He waited 72 years for his Red Sox to unfurl a World Series banner at Fenway Park. He rooted for the Patriots, UCONN basketball, and in his later years, added Notre Dame to the list (thanks to his grandchildren, now students at the college.) No one remained a stranger in Bill’s company for long. He welcomed our friends, significant others, and new family members with generous and open arms. He was an avid reader – especially fond of mysteries - and a fan of the local library, instilling in his children the value of a good book. Summers with family included vacationing at Cape Cod; a day at the seashore was invariably followed by challenging willing participants to a lively Trivia contest or a rousing game of Clue. Bill is survived by his dear wife, Vaundel of Lenoir NC; his children, Pam Healey Robey and her husband Matt of Redding CT; Debbie Healey Langley and her husband Clint of McMurray PA; Brian Healey of Palm Springs, CA; and the mother of his children, Alyce Healey of Windsor Locks, CT. In addition, “Pa” will be greatly missed by his five grandchildren, his pride and joy: Connor, Kyle, Caroline, Garrett, and Juliette. Lastly, Bill is survived by his brother, Ken Healey, and sister-in-law, Virginia Healey, and many members of his extended family. He was preceded in death by brothers Philip, James, Jack, and sisters Evelyn and Barbara. A celebration of Bill’s life will be private and take place at a later date. In lieu of flowers, please consider donating in Bill’s memory to Caldwell Hospice and Palliative Care, 902 Kirkwood St. NE, Lenoir NC, 28645, caldwellhospice.org; Lewy Body Dementia Association, 912 Jillian Hill Road SW, Lilburn, GA 30047, LBDA.org; or the Caldwell County Public Library, 120 Hospital Ave., Lenoir NC 28645, CCPL.us. Online condolences can be sent to the family at www.evansfuneralservice.com. Evans Funeral Service and Crematory of Lenoir is serving the Healey family.

William Edward Healey died peacefully with family by his side on September 28, 2020, at Caldwell Hospice in Hudson, NC. Bill was born on April 26, 1932, in Boston, MA to Philip and Monica (Joy) Healey. Bill was passionate about traveling,... View Obituary & Service Information

The family of William Healey created this Life Tributes page to make it easy to share your memories.

William Edward Healey died peacefully with family by his side...

Send flowers to the Healey family.