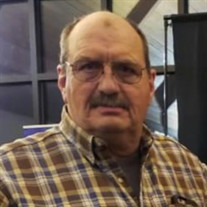 David Abernathy, 68, went home to be with His Lord and Savior on September 2, 2021 at his home. David was born in Burke County on November 18, 1952 to the late Eugene Abernathy and Beatrice Costner (Eddison). David was married to Kathey Abernathy for 38 years. David spent his career as an over the road truck driver, where he finished his career with Chad Abernathy Trucking, LLC. He was a member of New Beginning Missionary Baptist Church. David was a beloved husband, father, “Paw” Dave, and friend to many from all around the world. He never met a stranger, and was always there to fill a need for anyone he met. David had a heart that was bigger than him. The world will not be the same without “Paw” David. In addition to his parents, David was preceded in death by his sister, Becky Chapman and his two brothers, Moe Abernathy and Bayne Abernathy. He is preceded in death by his daughter-in-law, Carol Ann Abernathy. David is survived by his wife, Kathey, and his three sons: James Abernathy (Candy); Rob Wiles (April); and Chad Abernathy (Amanda); and his daughter, Jennifer Wiles. He is, also, survived by his “adopted daughter” Shannon Patterson. He is survived by his sisters: Hazel Sumpter and Johnsie “Lulu” Poplin and two brothers: Roger “Skeet” Abernathy and Glen “Copperhead” Abernathy. Paw David is survived by his grandchildren: Jamie Aldridge (Trevor); Jimmy Abernathy; Ben Callaghan; Hunter Wiles; Colton Wiles; Kailey Royal; Gage Royal; one great-grandson, Wyatt Aldridge and one grand-puppy, Mack. Paw David had many “adopted” children and grandchildren that he leaves behind to cherish his memory. He is survived by his two aunts: Liz Pope and Rene Yates; as well as, numerous cousins, nieces, and nephews. There will be a service held on Monday, September 6, 2021 at New Beginning Missionary Baptist Church at 2:00 pm; officiated by Pastor Daniel Buchannan and Pastor Kenneth Hammock. There will be a visitation held on Sunday, September 5, 2021 at New Beginning Missionary Baptist Church from 6:00 pm until 8:00 pm. Interment will be at Blue Ridge Memorial Park immediately after the service. Serving as pall bearers will be: Michael Prestwood, Garrett Lambert, Austin Wilcox, Brian Craig, Ross Parsons, Lewis George, Audie Young, and Alan Long. Honorary pall bearers will be: James Simmons, Ricky Reid, Jimmy Hamby, Keith Scruggs, Max Prestwood, Jr., and Mitchell Prestwood. In lieu of flowers, the family asks that donations be sent to Amorem Hospice of Caldwell Care at 902 Kirkwood Street, Lenoir, NC 28645. Online condolences may be sent to www.evansfuneralservice.com Evans Funeral Service is honored to serve the Abernathy family.

David Abernathy, 68, went home to be with His Lord and Savior on September 2, 2021 at his home. David was born in Burke County on November 18, 1952 to the late Eugene Abernathy and Beatrice Costner (Eddison). David was married to Kathey Abernathy... View Obituary & Service Information

The family of David Eugene Abernathy created this Life Tributes page to make it easy to share your memories.

David Abernathy, 68, went home to be with His Lord and Savior...

Send flowers to the Abernathy family.