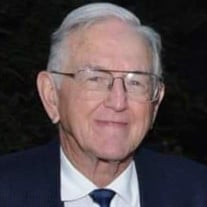 Lenoir - George T. Crowell, Jr., age 91, passed away on Wednesday, March 10, 2021 at Caldwell UNC Healthcare. He was born in New Hanover County on June 20, 1929 to the late George T. Crowell, Sr. and Alene Mitchum Crowell. He was married to his beloved wife of 72 years, Helen Withers Crowell. George lived most of his 91 years in Lenoir. He graduated from Lenoir High School and attended UNC Chapel Hill. He operated Crowell’s Inc. that began in 1937, which was started by his father. He worked alongside his father and later with his son, George T. Crowell, III. George always met his customers with a handshake, smile, and a genuine interest in their lives. He always made sure his customers needs were met. A humanitarian and philanthropist, George was always there to help his fellow man and donate to many causes and organizations. He was also civic minded and served on many boards, including CCC and TI Foundation, Lenoir Bank of Granite Advisory Board, First Union National Bank Local Board, Mutual Savings and Loan, and Rymco Corporation Board based in Winston Salem, NC. A devoted member of the First United Methodist Church, George served as a Sunday School Teacher, usher and chair of the usher committee, and as a member of the Board of Trustees. He also spent time tutoring and mentoring to students in the Caldwell County school system. George married his high school sweetheart and they had a daughter, Vale Crowell Biddix and husband, Tim and son, George T. Crowell, III and wife, Michele. He loved nothing more than spending time with his family. He had always been active in the lives of his children and his grandchildren, Mark Biddix and wife, Aaris; Geoffrey Biddix and wife, Deana; Kelly Crowell Howell and husband, Dustin; and Jordan Crowell Johnston and husband, Chris; and his great-grandchildren, Brayden Biddix, Carson Biddix, and Allie Howell. George was of a generation of men that understood the meaning of being a true gentleman and a man of honor. His accomplishments to mankind were great and he was beloved by many people. A private service celebrating George’s life will be held at First United Methodist Church with interment at Blue Ridge Memorial Park. The family respectfully requests that in lieu of flowers, memorials may be sent to First United Methodist Church, 309 Church Street NW, Lenoir, NC 28645.

Lenoir - George T. Crowell, Jr., age 91, passed away on Wednesday, March 10, 2021 at Caldwell UNC Healthcare. He was born in New Hanover County on June 20, 1929 to the late George T. Crowell, Sr. and Alene Mitchum Crowell. He was married to... View Obituary & Service Information

The family of George T. Crowell Jr. created this Life Tributes page to make it easy to share your memories.

Send flowers to the Crowell family.