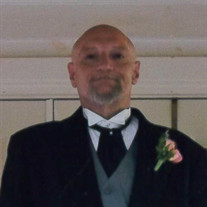 Robert Elton Greer Jr., age 62, fell asleep in Christ on March 9, 2021 at the Gordon’s Hospice House in Statesville, NC., surrounded by his wife, family, and pastor. Robert was born on December 7, 1958 in Watauga County to the late Robert Elton Greer Sr. and Shirley Ann Norris Greer. After graduating from Hibriten High School in 1977, Robert enlisted in the army. After basic training at Fort Bragg, NC he graduated from the US Army School of Music at Virginia Beach, VA. He was then stationed at Fort Polk, LA where he was a member of the 56th Army Band as a percussionist. Music was one of Robert’s greatest passions and he continued his musical pursuits as long as his health enabled him to do so. He was a founding member of the Caldwell County Fife and Drum Corp and he was very active in Civil War re-enactments throughout battle fields along the Eastern Coastal area. For his life’s work Robert was an accomplished wood carver. Whether carving by hand or by guiding a machine, he could fashion anything out of wood. He was a perfectionist and took great pride in a job being done with great skill and detail. Robert had examples of his work on display at the Smithsonian and he carved chair components which are currently in use in the Senate Chambers at the US Capitol Building in Washington, DC. Robert was preceded in death by his first wife, Pam Schlomar Greer, daughter, Laura Greer Williams, a grandchild, his parents, and a sister, Virginia Greer Pritchett. Left to cherish his memory are his wife, Lisa Barnes Greer, step-son Daniel Allen (Krystal), his sister, Elizabeth Greer Callaway (Chris), his nephews James Pritchett (Ashley Haas), Jacob Pritchett (Marley), brother-in-law Ken Pritchett, four grandchildren (Robert, Laura, Avery and Levi), and friend of the family Michael Adkins. Robert was a Christian and of the Advent Christian faith. He attended both Calvary Advent Christian Church of Lenoir during his adult years as well as Tabernacle Advent Christian Church of Lenoir where he was baptized as a teenager. A funeral service for Robert Greer will be held on Friday, March 12, 2021 at 2:00 PM at Tabernacle AC Church with Reverend Bob Copeland officiating. Burial will follow in the church cemetery. Receiving of family and friends will be held prior to the funeral from 12:30 pm to 2:00 pm. We ask that appropriate precautions be taken during this time of COVID-19. Military Honors will be provided by the US Army National Guard and the Caldwell County Veterans Honor Guard. Words of comfort may be shared with the family at www.evansfuneralservice.com. Evans Funeral Service & Crematory is honored to serve the family of Mr. Robert Elton Greer Jr.

Robert Elton Greer Jr., age 62, fell asleep in Christ on March 9, 2021 at the Gordon&#8217;s Hospice House in Statesville, NC., surrounded by his wife, family, and pastor. Robert was born on December 7, 1958 in Watauga County to the late Robert... View Obituary & Service Information

The family of Robert Elton Greer Jr. created this Life Tributes page to make it easy to share your memories.

Send flowers to the Greer family.