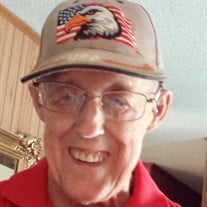 Robert Eugene McCrary (Gene), 76, of Lenoir, died peacefully Sunday, January 17, 2021 at Lenoir Healthcare after a period of declining health. He was born August 6, 1944 in Caldwell County. He was the son of the late Dennis McCrary, Sr. and Charlotte Summerlin McCrary. In addition to his parents, he was preceded in death by his brother-in-law, Mickey Penley. Gene had a contagious smile and laugh. Life was a joy to him and he was never shy to speak to a stranger. You knew immediately that he had a love for Jesus. He loved everything about old movies, westerns, King Kong, The Three Stooges, Lucy, and an occasional watch on the Sci Fi channel. He loved Ricky Nelson, Fats Domino and Patsy Cline the most, and there was not a recorded song that he did not have of any of these, as well as many others. Gene had his own “little house” outside of the main house where he lived with his sister, Barbara Penley, who cared for him. It was lined with many pictures of John Wayne, his favorite! He had wall to wall videos and open reel tapes that were always available for anyone who wanted to sit down a while and watch a big screen movie. There was not a record player or tape player that he could not rig to work. One of the things he loved to do was to record his voice singing with a record and then sing with that tape as it was playing…..he’d say, “Hey, do you want to listen to this song I recorded?” He never went anywhere without a cassette player and a bag full of tapes. His favorite thing to do was to go to the flea market. He was, for sure, “a one of a kind”, and will be missed so much by so many. Gene is survived by a sister, Gail Warren of Lenoir, NC, a brother, Dennis McCrary, Jr. and wife, Carolyn McCrary of Lenoir, NC, a brother, Charles McCrary and wife, Sharon McCrary of Lenoir, NC, and a sister, Barbara Penley of Lenoir, NC, whom he lived with for many years before moving to Lenoir Healthcare in December 2019. He is also survived by many nieces and nephews; Leslie Warren, Chad McCrary, Chris and wife, Donna Warren, Todd and wife, Erin Penley, Micheal Penley, Jody and Amy (McCrary) Nelson, Chris and Angela (McCrary) Steele, Shanna Rogers, Chase and Summer (McCrary) Ritchie, and great nieces and nephews, Tanner Penley, Hunter and wife, Lacey Penley, Justin and wife, Kayla Fuller, Bryson Penley, Kodey Penley, Kyndell Warren, Garrett Penley, Macy Penley, Molly Penley, Noah Nelson, Rylei Ritchie, Hannah Nelson, and Peightyn Ritchie. A graveside service will be celebrated at Blue Ridge Memorial Cemetery in Lenoir, NC, officiated by Pastor Todd Braswell on Saturday, January 23, 2021 at 11:00 AM. Memorial Contributions may be made to Alzheimer’s Study.

Robert Eugene McCrary (Gene), 76, of Lenoir, died peacefully Sunday, January 17, 2021 at Lenoir Healthcare after a period of declining health. He was born August 6, 1944 in Caldwell County. He was the son of the late Dennis McCrary, Sr. and... View Obituary & Service Information

The family of Robert "Gene" McCrary created this Life Tributes page to make it easy to share your memories.

Send flowers to the McCrary family.