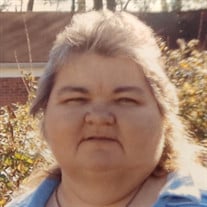 Ms. Angela Deloach Sigmon, age 55, of Lenoir passed away on Tuesday, December 30, 2020 at her home. Born September 21, 1965 in Buchanan County, VA, Angela was a daughter of Lawrence Deloach and the late Martha Reynolds Deloach. Angela enjoyed cooking for others, especially making candy. She enjoyed camping and trips to the coast. Angela especially enjoyed spending time with her family and friends. In addition to her Mother, she is also preceded in death by two sisters, Sabrina Bowers and Kay Bryant; a brother, Mark Deloach. In addition to her father, survivors include her partner of 30 years, Dana Edwards; two sisters, Janet Deloach and Loria Angeles; three brothers, Tommy Deloach, Wayne Deloach and Ronald Edwards; a step son, Gene Edwards; a niece, Briana Bowers; a nephew, Jordan Deloach, and her faithful pet, Momo; she is also survived by numerous other relatives. A graveside celebration of Angela’s life will be held on Monday, January 4, 2021 at 3:00 PM at the Pisgah Baptist Church Cemetery with Pastor Ronnie Miller officiating. Angela will lie in state at Evans Funeral Service on Monday prior to the service from 12:00 PM to 2:00 PM. Online condolences can be sent to the family at www.evansfuneralservice.com. Evans Funeral Service and Crematory of Lenoir is serving the Sigmon family.

The family of Angela Sigmon created this Life Tributes page to make it easy to share your memories.

Send flowers to the Sigmon family.