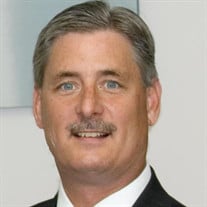 David Owen Calloway, 65, of Cary, NC, passed away on September 27, 2021 after a valiant battle with prostate cancer. He was surrounded by family and went to Heaven in peace. Born March 1956 in Granite Falls, NC, to parents Owen and Betty “Mickey” Calloway. As a child, David was well-mannered and outgoing. He graduated from Granite Falls High School in 1974. From there, David served four years in the United States Air Force at Minot Air Force Base in North Dakota, where he led an electro-mechanical team responsible for maintenance of Intercontinental Ballistic Missiles (ICBM). It was here in this cold, flat, windy place David met a warm, adventurous, and spunky woman and the love of his life, Jordi. The two dated and eventually married in 1982. David attended and graduated from NCSU with a Bachelors in Electrical Engineering & Telecommunications in 1983. David forged a career with MCI Telecommunications in various roles, lastly as a Senior Manager. The two lived in NY, NJ, and VA, growing their family with Beth and John, before settling in Cary, NC in 1994. In 2001, David changed careers and pursued a life-long passion of investments, financial markets, and retirement planning; where he and Jordi worked together to build a successful practice with Thrivent Financial. David, as a Wealth Advisor, earned his Certified Financial Planner (CFP) designation in 2007. David’s warm personality and technical financial acumen made him a natural fit for the industry. David had passion for investment strategy, and took his research very seriously, serving his clients with the utmost care and respect. David was known as a “talker”, a great conversationalist, finding genuine interest in any person and any subject readily discussed. He had a wide-range of interests including drumming (in his band 3BS), music, wine, astrophysics, economics, technology, and spoiling his family with thoughtful gifts and regular visits. David was a beloved son, brother, brother-in-law, husband, father, father-in-law, and PopPop to his family and he will be dearly, dearly missed. David is survived by his parents, Owen and Betty “Mickey” Calloway; his wife, Jordi Calloway; his children & spouses, Beth & Scott Kerby and John & Christen Calloway; his grandchildren who called him PopPop, Sandra and Owen Calloway; his two sisters and brother-in-laws, Amy Whichello & Tim Shank and Carla & Matt Ingram; nephews and nieces and their spouses, Brian and Megan Whichello and their son Oliver West; Emily Whichello, Meredith Ingram, James Ingram, and Emma Ingram. A small, private celebration of David’s life with family and close friends will be held on Saturday, October 9, 2021. Thank you to everyone for the incredible love and support over the last several months and in his final weeks and days. Donations can be sent to AMOREM, formerly Burke & Caldwell Hospice and Palliative Care, Inc., in honor of David Calloway. They are angels on earth and gave him the best care we could have asked for in the final weeks of his life. https://donatenow.networkforgood.org/1400882 You are with God now David, we love you, and will see you again.

David Owen Calloway, 65, of Cary, NC, passed away on September 27, 2021 after a valiant battle with prostate cancer. He was surrounded by family and went to Heaven in peace. Born March 1956 in Granite Falls, NC, to parents Owen and Betty &#8220;Mickey&#8221;... View Obituary & Service Information

The family of David Owen Calloway created this Life Tributes page to make it easy to share your memories.

David Owen Calloway, 65, of Cary, NC, passed away on September...

Send flowers to the Calloway family.