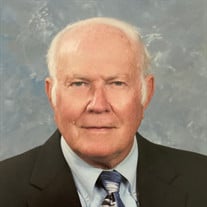 David Lee Shell of Hudson passed away Sunday night, Aug. 30, 2020, at the Caldwell Hospice and Palliative Care facility in Hudson following a period of declining health. He was born October 9, 1939, in Lenoir and was the son of Lucille C. and Earl C. Shell, Sr. who preceded him in death. Also preceding him in death were a brother, Earl C. Shell, Jr. and a nephew, Ronald Shell both of Seattle, Washington. David attended Hudson schools and graduated from Hudson High School in 1957. He was also a 1961 graduate of Lenoir Rhyne College. After college graduation, he joined the United States Air Force. After completing Officers’ Training, he trained for and became a B-52 navigator. David completed two tours of combat duty during the Vietnam War. After leaving the air force, he was employed by FAA in Memphis, TN. After returning to Caldwell County to live, he also worked a number of years for Johnson Electric Company in Lenoir. David was an active member of Hudson First Baptist Church. He was a member of the Hudson Lions Club as long as his health permitted. His survivors are his loving wife of 50 years, Betty Jean Andrews Shell, one daughter, Mary Elizabeth Shell Morgan and husband Todd of Kernersville, NC, and one son, Charles David Shell and wife Melanie of Hudson. He is also survived by four grandchildren. Kathryn Elizabeth Morgan (Kate) of Raleigh, Hudson Meloy Morgan of Kernersville, Elias David Shell and Hannah Mae Shell both of Hudson. Also surviving are one niece Barbara Stephenson of Poulsbo, Washington, and several cousins. A graveside service celebrating David’s life will be held on Thursday, September 3, 2020 in the Hickman Cemetery at 10:00AM with Pastor Mack Jarvis, III and Pastor Wade Dellinger officiating. The family request memorials be made to Caldwell Hospice and Palliative Care at 902 Kirkwood Street, Lenoir, NC 28645 or to Hudson First Baptist Church at 345 Main Street, Hudson, NC 28638. Online condolences can be sent to the family at www.evansfuneralservice.com. Evans Funeral Service and Crematory of Lenoir is serving the Shell family.

David Lee Shell of Hudson passed away Sunday night, Aug. 30, 2020, at the Caldwell Hospice and Palliative Care facility in Hudson following a period of declining health. He was born October 9, 1939, in Lenoir and was the son of Lucille C.... View Obituary & Service Information

The family of David Shell created this Life Tributes page to make it easy to share your memories.

Send flowers to the Shell family.