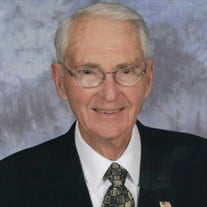 Lt. Col. Floyd Annas, USAF Retired, 95 of Sawmills, NC passed away gaining his second set of wings at Caldwell Hospice and Palliative Care in Hudson on Wednesday, November 18, 2020. His final flight was to his eternal heavenly home and we rest assured his final approach and landing was in the arms of his Lord and Savior, Jesus Christ. Floyd, dad, grandpa was born on March 17, 1925 in Caldwell County to Rosa Fulbright Annas and Fred (Duff) McDuffey Annas. Upon graduating from Hudson High School, he was accepted into the Aviation Cadet Program of the Army Air Corps. Floyd received his first set of pilot wings in December of 1944 and spent much of his active service time flying in the South Pacific, primarily Philippines. He was certified in many aircraft, including helicopters, but his primary aircraft was the B-17. Growing up on a small family farm, he later said he went “from being a plow boy to fly boy”. After his active service, Floyd engaged with the USAF reserve until his military retirement in 1968. In civilian life, Floyd was active in business, non-profit, and religious aspects of our community. He attended Clevengers College of Business and served as owner and President of Granite Insurance Agency from 1957 until his retirement in 1990 along with his wife and partner, Theresa. In the earlier years, the business did both insurance and real estate. During his business career he served as president of both the Catawba Valley Insurance Association and the Hickory-Catawba Valley Board of Realtors along with building a well-respected independent insurance agency in Granite Falls. In the non-profit community, Floyd served in many capacities. He was on the organizing board of directors for Sawmills Volunteer Fire-Rescue, president of the Granite Falls Optimist Club, Board of Trustees at Valdese General Hospital, Chairman of the Town of Sawmills Planning Board along with many others. At his church, Mount Zion Baptist, Floyd served the Lord in many leadership roles including as a Deacon Chair, Sunday School Director, Church Training Director and Church Clerk. At a county level, he was involved in many roles with Caldwell Baptist Association and after retirement worked in a part time role as Director of Associational Development. His love for service also led to him being appointed to the General Board of the Baptist State Convention of North Carolina and other committee work. Floyd had a long relationship with the North Carolina Baptist Assembly at Fort Caswell beginning with his first visit in 1958. He assisted in organizing groups from Caldwell Baptist Association for annual volunteer work weeks. This work continues today. Floyd and his wife, Theresa enjoyed travel and had the opportunity to take several international trips along with numerous Elderhostel and Christain Tours journeys during their retirement years. God blessed their time together and they enjoyed each other’s companionship. In addition to his parents, Floyd was proceeded in death by two sisters, Kathleen Lingerfelt Coffey and Frances Fox along with one brother, Richard A. Annas. He is survived by his loving wife and primary caregiver, Theresa Smith Annas and two sons, Neil (Lou Anne) and Mark (Lisa). Grandchildren are Lauren Tilton (Ryan), Holly Annas, Cameron (Tiffany) Annas and Aaron Annas for which he was always so proud of their individual accomplishments. Many of the bright points in his last years were provided by his great-grandchildren, Max Tilton, Cammie and Jak Kerns. Over the past 5 years, the family has been served by several caregivers and they express their sincere thanks to all, but especially to current caregivers, Jerry Hawn and Lori Joplin. A graveside funeral service will be held on Sunday, November 22 at 2:00 pm at Mount Zion Baptist Church, Sawmills, NC. A presentation of military honors will be done by the Caldwell County Veterans Honor Guard. The family ask that social distancing guidelines be followed. Memorials may be made to Lottie Moon Christmas Offering c/o Mount Zion Baptist Church, 1787 Cajah’s Mt. Road, Hudson, NC 28638 or NC Baptist Assembly at Fort Caswell, 100 Caswell Beach Road, Oak Island, NC 28465.

Lt. Col. Floyd Annas, USAF Retired, 95 of Sawmills, NC passed away gaining his second set of wings at Caldwell Hospice and Palliative Care in Hudson on Wednesday, November 18, 2020. His final flight was to his eternal heavenly home and we rest... View Obituary & Service Information

The family of Floyd Annas created this Life Tributes page to make it easy to share your memories.

Send flowers to the Annas family.